As I said at the conclusion of last month’s 12DBY update, my strategy for September would hinge on whether to seek “staked out” grass pipers or wait until the end of the month to target migrant land birds.

An Upland Sandpiper was recorded at M&M Dairy on 7 Sept, and when Marie and I went to search for it we also found two Buff-breasted Sandpipers. Since both birds were continuing on the 11th, I decided to head there the next morning and try for them for the 12DBY challenge.

I got there around mid-morning and in one of the muddy pools on the western end of the pasture I noticed a squat peep in my scope. I studied it carefully and determined it had all the characteristics of a Baird’s Sandpiper! This species was fresh in my mind since I had just seen one in Glendale, Arizona, a couple weeks prior at the Recharge Ponds where I was chasing an adult Sabine’s Gull prior to catching my flight home. 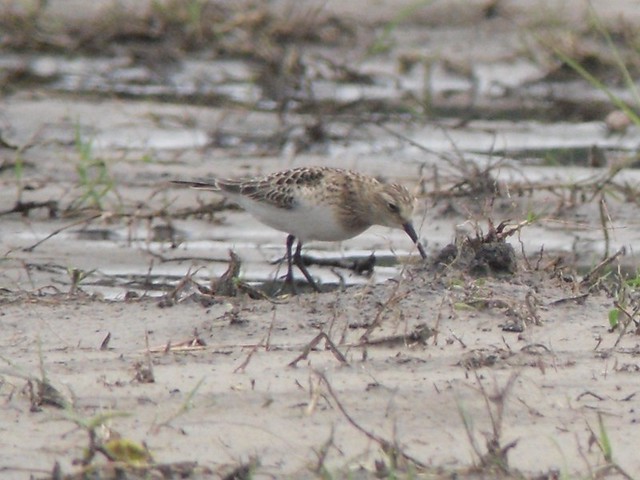 The bird I found was clearly larger than the Least Sandpipers near it and was smaller than a nearby Pectoral. It had the “attenuated” look of a long-winged peep and when it faced me head on that cinched it; this bird had the crossed primaries in the back and had the classic flat-backed posture typical of a Baird’s.  I took a few photographs of the bird and shared the scope view with JC Knoll (who moments before I finally had the pleasure of meeting in person) just before the bird took off; it was not relocated until the following day. This was the first photo documented record of the species in the county, and just the third known occurrence in Duval County history.

As I observed the bird, I called Dave Foster who arrived shortly afterwards and who got us permission to walk into the pastures to look for more shorebirds. In addition to a small group of rather early Wilson’s Snipe, we found the Upland Sandpiper way out in the middle of the field, got to see it fly around, and make it’s Loon-like call. On the way back to the truck I caught a brief glimpse of the Buff-breasted Sandpiper, thus securing the 12DBY hat trick of rare shorebirds!

Other stops throughout the day produced a nice variety of birds but nothing else new for the competition. October’s 12DBY will certainly focus on woodland birds and migrant land birds, as I’m missing many of the warblers and others. After September, I’m at 206 Duval County species in the 9 days.